Casey Junior is a fictional anthropomorphic steam locomotive and among the more memorable characters of the 1941 Disney film, Dumbo, but has also appeared in other Walt Disney productions. His name is a reference to Casey Jones, the famous railroad engineer who died in a train collision in 1900.

A Disneyland attraction, Casey Jr. Circus Train, is based on Casey Junior, with an updated version running at Disneyland Paris. Casey Jr. Splash & Soak Station, a water play area themed around the character, was added to the Magic Kingdom in 2012 in the Storybook Circus section of that park's new Fantasyland.

In the film Dumbo, Casey Junior is the tender engine hauling the circus train, and even has his own song. Casey appears frequently throughout the film, and is shown to be somewhat sapient. For example, when the Ringmaster calls for all aboard, Casey's whistle can be heard tooting:

As is the case with most Disney vehicles, Casey Junior has the ability to move in a more fluid way than actual locomotives, and his boiler is often seen bending and twisting like rubber when in motion.

In addition, he can twist and flex his metal body to express motion. He uses his steam cylinders like limbs, giving him the ability to shrug, point and make other gestures.

Although a male (according to Casey's song, being referenced as he or him), Casey was originally voiced by Margaret Wright and he is currently voiced by Cathy Cavadini. While the sound of the voice resembles that of a voice processed through a vocoder, it was actually done with a more primitive device, a Sonovox, which uses one or two small loudspeakers in contact with the throat, which allowed Wright to "speak" by modulating an artificially produced sound with her mouth.

In The Reluctant Dragon, According to a cartoon done before Dumbo, Casey was in fact, formerly a passenger engine. He unfortunately crashed after an effort to jump the chasm left by a broken bridge in a storm. In this film,he was of different wheel arrangement, 2-4-0 with the main rod on the forward driving wheel. He also had a bell and wasn't quite as stubby. In his circus work he was a 2-4-0, but his rod arrangement changed to the back wheel, and his bell was removed, and he became more stubby. This leads one to think he was overhauled after the accident and bought by the circus.

Casey Junior has a 2-4-0 wheel arrangement, a small four-wheeled tender at the back, a big tall funnel, a little lamp hat, a short stumpy boiler, a short stumpy dome with a whistle on the top and a small cowcatcher at his front.

Casey Junior at the circus grounds

Casey Jr in Where's My Mickey? 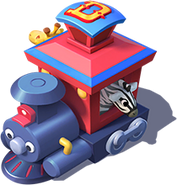 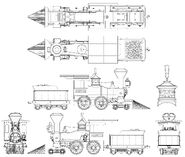 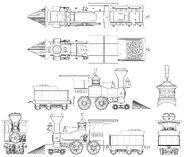 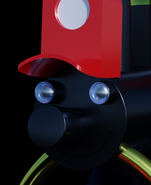 Add a photo to this gallery

All Aboard, Let's Go!

All Aboard, Let's Go!

Casey Junior's comin' down the track, COMIN' DOWN THE TRACK, with a smokey stack!

I Thought I Could!

A happy ending
Add a photo to this gallery

Add a photo to this gallery
Retrieved from "https://disney-fan-fiction.fandom.com/wiki/Casey_Junior?oldid=27079"
Community content is available under CC-BY-SA unless otherwise noted.