Sorcerer Mickey Mouse is the magical form of Mickey Mouse, and his most famouse role. Mickey Mouse as a sorcerer first appeared as the main character in the animated 1940 film Fantasia.

During the making of Fantasia, audiences were annoyed because Mickey had nothing but good luck unlike his friends Donald Duck and Goofy. When audiences started to ignore Mickey Walt Disney decided to cast him as the main character in the film Fantasia. The plan worked and Mickey once again became popular. Mickey was also given a new design. His circle body was changed into a pear shape and his nose became smaller and fans say Disney made him cuter. Mickey was transformed into a magical character that most people see today.

Mickey was working for a sorcerer master named Yen Sid and he was learning how to perform magic and Mickey was doing chores at the time. Mickey was tired just like his master. Yen Sid went to rest and Mickey stole the sorcerer hat and became Sorcerer Mickey. Mickey tried to bring a broom to life to do the chores instead. Mickey fell fast asleep while the broom ended up flooding the entire tower. Mickey tried to stop it but it was to much, Yen Sid came and stop the madness and Mickey was sent to finish his work.

On The Mickey Mouse Club, Mickey would appear as Sorcerer Mickey every Wednesday for "Anything Can Happen Day".

Sorcerer Mickey reappears in the Sorcerer's Apprentice segment added to the sequel Fantasia 2000. Sorcerer Mickey also appears in live-action where he tells Donald it is time for his segment.

Sorcerer Mickey makes a few appearances on House of Mouse. In the episode "Mickey and Minnie's Big Vacation", in which he had to save the House of Mouse from a flood caused by Donald Duck and Daisy Duck. In "Goofy For a Day", Mickey arrives in his sorcerer outfit at the opening of the show, telling the audience it's been a busy day.

When Jafar, Hades, Captain Hook, Ursula, and Cruella De Vil take over the House of Mouse, Mickey becomes Sorcerer Mickey and battles Jafar in order to take control back. He almost loses the battle when Jafar manages to knock his hat off, but fortunately Aladdin shows up to toss him Jafar's lamp and trap him in it. 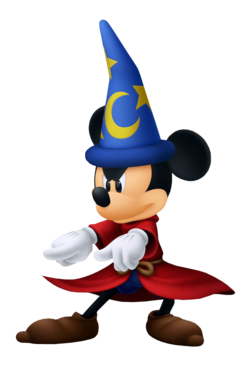 In Kingdom Hearts Birth by Sleep, Mickey becomes a D-Link for Ventus and Aqua. While using him as a D-Link, they can either create an aerial attack or release magical light bullets to inflict damage on the enemy.

Mickey appears in his sorcerer form in the Fantasia-inspired world, Symphony of Sorcery. Like the Country of the Musketeers, this world is set sometime during Mickey's training in the past. Sora and Riku encounter Sorcerer Mickey during their journey through the Sleeping Realm. Much of his role in the original segment is reproduced, as are elements of him conducting a magical symphony.

The introduction of the game also has animation of him on the bottom screen conducting the music to go with the action above.

Epic Mickey 2: The Power of Two

Sorcerer Mickey appears as a costume Mickey can change into.

Sorcerer Mickey was announced as a figure at the 2013 D23 Expo and was given away early to attendees, with a regular release set for January 2014. It is currently unknown if the normal version of Mickey will appear in the game. 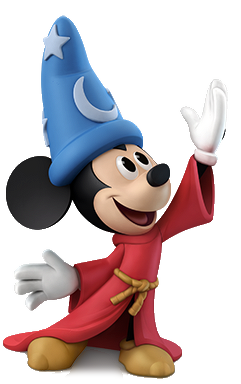 Disney Parks and other live appearances

In Disney's Hollywood Studios, Sorcerer Mickey occasionally comes out and takes pictures with guest. He is also the official mascot of the park. Sorcerer Mickey has his own spell card known as "Apprentice Mickey's Broomsticks" in the attraction Sorcerers of the Magic Kingdom.

At Disneyland, Sorcerer Mickey is also one of the variants of Mickey one can meet when visiting Mickey's Movie Barn in Mickey's Toontown.

Sorcerer Mickey & the Spring Sprite appears during the show's grand finale in the live nighttime water spectacular at Disney California Adventure. Sorcerer Mickey is seen making his own water effects and is the last character seen before the show ends.

In Fantasmic!, Mickey takes on the guise of Sorcerer Mickey in the opening and finale of the show in the American versions of the show, and despite promotional material, never fights villains as the Sorcerer (wearing his regular shorts when facing Jafar in the Orlando version, fighting Dragon Maleficent as the Brave Little Tailor).

In the Tokyo DisneySea version, Mickey stays as the Sorcerer throughout the show, battling The Witch's allies after being entrapped in the Magic Mirror. The Sorcerer's Apprentice theme also appears more often in the show's soundtrack. In the finale of this version of the show, Sorcerer Mickey's robes become white and glowing as he controls the fireworks and fountains of the finale.

Sorcerer Mickey's magical hat is the main item in the computer animated short held at Disney's Magic Kingdom and Tokyo Disneyland theme parks. The hat goes into many famous Disney films during some of their most famous Disney musical scenes. During the hat's adventure it is being followed by Donald Duck who is trying to get the hat back before Mickey notices it missing.

For pictures and screenshots of Sorcerer Mickey, click here.

Retrieved from "https://disney-fan-fiction.fandom.com/wiki/Sorcerer_Mickey?oldid=27374"
Community content is available under CC-BY-SA unless otherwise noted.